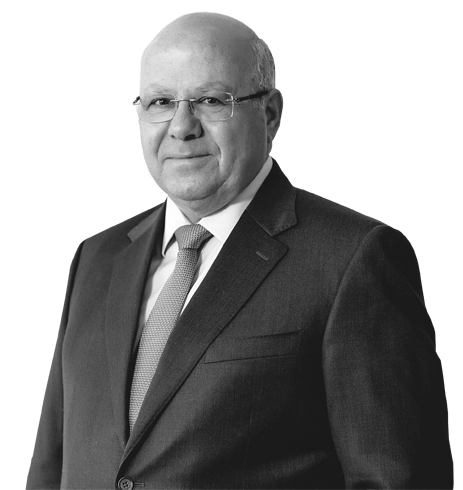 George Coucounis is the founder and Managing Director of the Coucounis Law firm and has been an advocate lawyer and legal counsel since 1983.

Mr Coucounis received his LLB law degree from the University of Thessaloniki in 1977, and earned a diploma in Shipping Law in 1980 from the University College of London. He holds a diploma in the Peace Movement and Humanitarian Law from the Institute of International Public Law and International Relations of Thessaloniki, and studied Effective Speaking and Human Relations at the Dale Carnegie Institute.

He has a long experience in litigation and, amongst his finest achievements, Mr Coucounis has successfully represented clients before the European Court of Justice in Luxembourg.

Mr Coucounis specializes in immovable property law, contract and banking law, rent control law and wills, and succession law. He successfully served for many years as the external legal advisor of the Cyprus Popular Bank and the Bank of Cyprus on real estate and tenancy matters.

He has frequently been consulted by many international and Cypriot corporations, and has co-operated with other legal firms in the United Kingdom, the Isle of Man, Greece, Germany, Austria, Bulgaria, Russia, the United States, Canada, South Africa, and Australia.

During his long and distinguished career, he has served as Legal Consultant to various banks, insurance companies, municipalities, community councils, the Larnaca Sewage and Drainage Board, and other authorities. Mr Coucounis served as Director of the Cyprus Petroleum Refinery and the National Betting Authority and has significant experience in the tourism industry and hotel management.

Known as an independent expert in the laws pertaining to Local Self-Government, Mr Coucounis has represented Cyprus in the Council of Europe since 2010. In November 2016, he was appointed by the Congress of Local and Regional Authorities of the Council of Europe as the consulting expert regarding the compliance of the Maltese Law with the European Charter of Local Self-Government. He also participated as the Cypriot expert in the Monitoring Visit of the Congress to Cyprus in April 2016.

He contributes as a regular columnist on legal issues to newspapers, including Phileleftheros since 2002 and the Cyprus Mail since 2004, as well as Nomiko Vima, Akinita and other legal journals.

Recently, in co-operation with Nikolas Koukounis, he contributed to the research project Democratic Efficacy and the Varieties of Populism in Europe, aiming at better understanding populism (DEMOS-2020) and the e-book Local Self-Government in Europe, covering local self-government in Cyprus, published in February 2021.

In addition to his extensive obligations as a lawyer, Mr Coucounis has a varied repertoire of interests that range beyond the field of law, including politics, travel, history, art, and music.